Toward a Stratified Phase Plan for Sigiriya, Sri Lanka

Toward a Stratified Phase Plan for Sigiriya, Sri Lanka

An important World Heritage Site in Sri Lanka, the ancient city of Sigiriya has been interpreted as a 5th-century landscape architectural site. Adding to Sigiriya's already dramatic setting of wild-elephant jungles and small rice-cultivating villages with their constructed tanks or man-made lakes, archaeological surveys and excavation from the mid-20th century have revealed brick and stone building layers, including watercourses and fountains as well as strategically placed boulders with constructed pathways and steps.

Taking a reception approach to the landscape may reveal more about its early architectural and cultural significance. One important site feature is a long polished wall upon which visitors from c. 7th to 13th centuries etched their responses to the site. About 1800 visitor responses have been recorded. To unpack Sigiriya’s layers and understand this significant visitor response however, we must better understand the site’s landscape plan, specifically its phases of construction, changes over time, and relationships to other significant built landscapes in the region.

Researchers in this project will use GIS technology and drawing software to develop digital site plans from existing hand-drawn plans, sections, and surveys, incorporating into the digital model all available information about phases of construction from existing archeological data. This project aims to contribute new digital and spatial approaches to long-standing interpretations of the vast archaeological records indicating constructed landscape in Sri Lanka and South Asia. 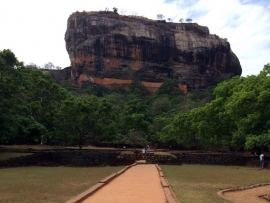 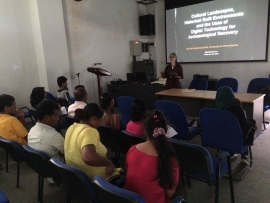