Professor of English and Cinema Studies

The Fan Engagement Meter identifies lines of film dialogue that fans most like to repeat, rewrite, revise, and riff on.  Does more fan fiction rework the scene in which Darth Vader tells Luke, “I am your father” or Han Solo and Princess Leia’s “I love you / I know” scene? Whose character inspires more fan writing: Hermione or Voldemort? And do these moments of high engagement correspond with other ways of analyzing the script? Do angry moments, for example, ignite more fan writing than sad ones? Are scenes with Bilbo and Gandalf rewritten more than scenes with Bilbo and Smeagol? These are just a few ways that fans and scholars may want to use this tool.

The fan engagement meter looks for 6-word strings of dialogue in film scripts and compares them with 6-word strings of writing in the Archive of Our Own fan fiction repository. You can use the tool to find exact word matches or looser matches. An exact match might show the successful coinage of a catchphrase (“May the force be with you”), where fuzzier matches might show fans transforming a scene into something new.

For now, the site includes films from Star Wars, Harry Potter, and Lord of the Rings/The Hobbit, because these franchises have some of the largest fan communities on Archive of Our Own. But we hope to include more franchises, scripts, and even books in the future. 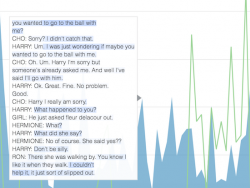