Graduate Teaching Assistant, Art and Archaeology of the Mediterranean World

Tell Billa (also known by its ancient eponym, Shibaniba) is an archaeological site located in northern Iraq.  It was inhabited beginning in the Early Dynastic period and continuing through the Neo-Assyrian and Persian periods (c. 2900-350 BCE).  The excavations of Tell Billa were carried out by the Penn Museum from 1930-1935, but the final results of excavation were never fully published.  Over 70 burials from the Assyrian periods were excavated and recorded, along with a number of architectural features.  Unfortunately, excavation records from several seasons at Tell Billa have been lost, but information about the burials and their artifacts, kept separate from the main excavation records, are preserved in the Penn Museum archives.  Tell Billa provides an excellent example of a provincial center close to the Assyrian Empire’s heartland.  Studying the mortuary material of such a site provides an opportunity to understand how proximity to an empire’s center allows for changes in adoption of cultural traits.  For these reasons, the remaining records from Tell Billa are being digitized by this project for further, more detailed investigation.

This project has made headway in Parts 1 and 2 of this project: all records in the Penn Museum archives (eight boxes, which contain documents such as artifact cards, excavation records, maps/plans, letters, and budgets) have been scanned and are in the process of transcription and image editing by the hired student.  The P.I. has pulled the ceramics from the Penn Museum’s collections to be scanned and has completed the initial stage of analysis on the ceramics.  The data from the archives and the data from the ceramic analysis is currently being entered into the existing database.   Once data entry is complete and the digital 3D models have been created (the next steps planned for April and May 2018), the P.I. will proceed to Part 3 and create the online exhibit. 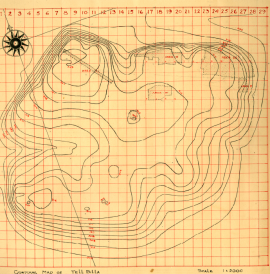