The research marks the first extensive survey of key Italian Baroque churches utilizing LiDAR technology as a tool for architectural representation.  I have traveled to Rome and the Northern Piedmont region of Italy over two summers, developing the extensive network necessary to gain access and permission to 3D laser scan over twenty of the most innovative Baroque churches in Italy. Supported by FARO® Technology with the latest LiDAR scanning technology, I have accumulated an exhaustive survey with unprecedented three-dimensional detail and resolution. Once collected, the immense data sets (up to 300 million points per church) are processed with the support of Autodesk™ cloud computing to inform methods for 2D and 3D architectural representation never before possible.

The first phase of the research is complete and is being published in the book Re-imaging the Baroque by Palombi Editori the prestigious Italian publisher founded in 1915 (see portfolio for documentation).  The book will be out in November with a foreword by Harvard Professor Joseph Connors, the preeminent American Baroque architecture scholar and former director of the American Academy in Rome.  In addition to the state-of-the-art images generated from the research, the book establishes how the development of architectural representation techniques have been deeply influenced by an integral relationship to surveying instruments and methods. Furthermore, it demonstrates how the interior space of architecture rather than the exterior has long been the fundamental experimental ground for both design and representational breakthroughs in the discourse.  By threading a line between the origins of surveying, the development of architectural representation, scholarship on the Baroque and current modes of design thinking, it circumscribes the navigational chart on which to ground the research.

The second phase of research takes a more speculative and interpretive stance combining LiDAR surveys with analysis of original drawings of the architects made by arc and cord instruments including the stereometric beginnings of projected geometry in the treatises of Guarini and Vittone.  The second book Re-Drawing the Baroque has passed peer review and is in the contract phase at Routledge to be published in 2018 (see portfolio for documentation).

The research has been well received nationally and internationally by an extremely broad and multidisciplinary audience both academic and professional. I have presented the work in the Penn Department of History and Classical Studies, PennDesign Lecture Series, the The Irwin S. Chanin School of Architecture at The Cooper Union and the 5th INTBAU International Event in Milan. In addition, the work has been exhibited in a solo exhibition Baroque Topologies at Addams Gallery at the University of Pennsylvania, in the 2017 Milan Expo exhibit Close Reading and is currently a traveling exhibition (2017-2018) Church of Big Data sponsored by Autodesk™ starting with London, Darmstadt, Tokyo, Dubai, Mumbai, Sydney, Sao Palo and will be installed at the Gallery at One Market in San Francisco,  where it will be on view for five years (average yearly visitors to the gallery is 10,000).  Publication of the work includes AD Magazine, a chapter in Putting Tradition into Practice: Heritage, Place and Design, the two largest circulating Italian newspapers LaStampa and Reppublica, upcoming chapters in Transformations in Classical Architecture: New Directions in Research and Practice and Digital Architecture beyond Computers: Fragments of a Cultural History of Computational Design and recently the feature cover article of the Pennsylvania Gazette.  Based on preliminary phases of the research, I was selected as one of two finalists for the 2017 Rome Prize for Architecture.

Read more about this project in the Pennsylvania Gazette. 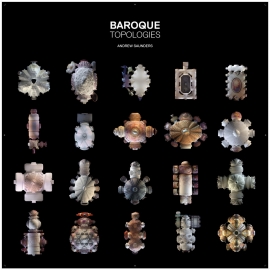 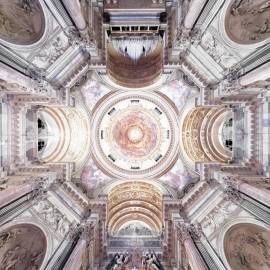 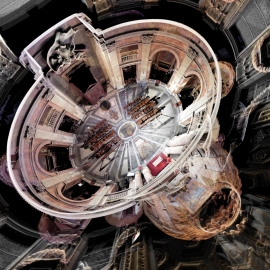 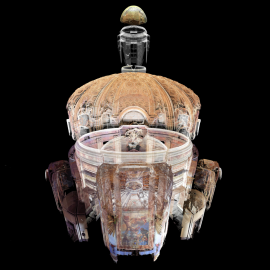