PhD Candidate, Art and Archaeology of the Mediterranean World

Lucas Stephens is a sixth year PhD student in the Art and Archaeology of the Mediterranean World program at the University of Pennsylvania. Lucas spends his summers in central Anatolia (modern Turkey) where he works at the archaeological site of Gordion, capital of the ancient Phrygian state and home of the legendary King Midas. His research focuses on the landscape around the ancient city, specifically on how a series of monumental burial mounds, or tumuli, relate spatially to other features in the landscape. To accomplish this, Lucas uses a variety of digital techniques including Geographic Information Systems (GIS), satellite photography, and geophysical prospection.

One of the most exciting things he is able to do is build 3D models of ancient landscape features through photogrammetry by means of a UAV quad-copter. Lucas is also working on a project to model long-distance movement across Anatolia, combining multiple sources of topographic and archaeological data, and employing network analysis to study the development of transportation networks over time. The goal of the project is to understand the complex web of relationships which stretched across Anatolia in the Iron Age and to help produce better forms of cartography for ancient states, which are too often depicted as homogeneous shapes with static boundaries. 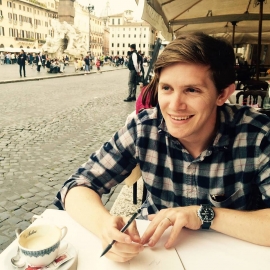