Julie Nelson Davis is Professor of Modern Asian Art in the Department of the History of Art. She studies the prints, paintings, and illustrated books in the genre of Ukiyo-e, the “pictures of the floating world,” locating these in the greater social, cultural, and political context of early modern Japan. Professor Davis challenges long-held assumptions in the field by reconsidering the production of print through the collaborative network of publisher, artist, carver, printer, and the audience; the role of these works to promote and market urban pleasures and diversions; and the way that these images influenced European and American art from the mid-nineteenth century through to the present. Most recently Davis was the co-curator for Inventing Utamaro: A Japanese Masterpiece Rediscovered at the Freer and Sackler Galleries at the Smithsonian (held April 8 through July 9, 2017) and was a consulting curator for the online catalogue for the Pulverer collection at the same institution (www.pulverer.edu). Davis has published widely on ukiyo-e, with two books: Partners in Print: Artistic Collaboration and the Ukiyo-e Market (2015) and Utamaro and the Spectacle of Beauty (2007); journal articles in Impressions, Japan Forum, Kokka, Ukiyo-e Geijutsu, and others; as well as essays for publications for the Abe no Harukas Museum, the British Museum, the Japan Society, the Musée Cernuschi, and others. She is currently working on a book entitled, Ukiyo-e in Context, for the University of Hawai’i Press.

Professor Davis is rethinking the world of early modern print culture in Japan by studying the relationships between publishers and their commissioned talent—the illustrators, writers, block carvers, and printers—to reassess patterns of collaboration. By using information included in sheet prints and illustrated books, she plans to diagram these networks of affiliations, assess how publishers marketed their works to a broader audience, and place their spheres of production in the urban sphere through GIS mapping. 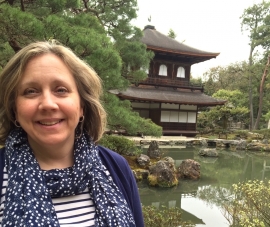