Olga received her MA in Comparative Studies and Russian Literature from the National Research University Higher School of Economics (Moscow) in 2018. Her master thesis was devoted to the study of creative writing institutions in Russia specifically the Higher Institute of Literature and Art (1921-1925) founded by Valerii Briusov and the Higher State Literary Courses (1925-1929). In her dissertation Olga is examining the questions of mutual influences among formalized education, creative processes, and literary evolution in the socialist world as a whole. Her project is aimed at analyzing and theorizing various literary institutions including the Gorky Literary Institute (1933-) and Literaturinstitut “Johannes R. Becher” (1955-) which produced (or sometimes failed to produce) socialist writers. What conditions made the emergence of such institutions possible and necessary? What new practices of pedagogy (and self-pedagogy) emerged after the Revolution? How were they connected to the formalist attempts to create a science of literature and other phenomena of the 1920s, on the one hand, and to new Soviet cultural policies and the emergence of socialist realist literature, on the other? How did these practices change after the death of Stalin and during the Thaw? How was the world cultural landscape shaped by these practices? How did Soviet and other socialist creative writing institutions impact the formation of the international “Socialist Republic of Letters” and what were the stylistic and generic peculiarities of the literary works created by the inhabitants of this “Republic”? These questions shape her research. As a graduate of business-informatics (BSc, 2012) and economics (MSc, 2014) programs Olga is also interested in digital humanities. In her dissertation she uses computational analysis, text analysis, and other digital tools to identify thematic and stylistic peculiarities of Soviet writers who graduated from the Gorky Literary Institute. Her general interests also include sociology of literature and modernism. 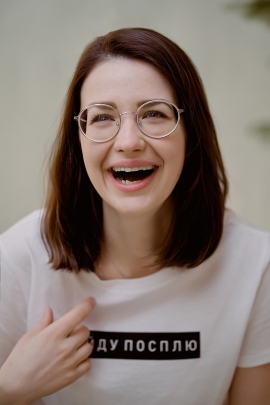