Chris D. Jimenez is an ABD doctoral candidate in English at Penn. His research focuses on 20th and 21st-century global Anglophone literature with a particular interest in ecocriticism and environmentalism, nuclear criticism, animal studies, and biopolitics. His dissertation-in-progress is tentatively titled "The Exploding Globe: Scale and Catastrophe in Contemporary Anglophone Literature." Chris also has an abiding interest in the digital humanities and has worked on a handful of DH projects regarding literary prize culture and networks. His DH work is featured in more detail at his website, Novels by Numbers. Formerly a Fontaine Fellow, Chris is one of the inaugural Andrew W. Mellon Price Lab Doctoral Fellows in the Digital Humanities for 2016-2017, contributing to the Price Lab's Mellon Seminars and DH project incubation.

Since Spring 2015, Chris has also worked as the Assistant Director for Communications at the Penn Center for Minority Serving Institutions, working as the Center's resident copy editor, graphic designer, and grant writer. Prior to his this position, he previously directed various student development programs for Penn's Graduate Student Center, including Year of Sound graduate events in 2013-2014 and grant-writing workshops, conferences, and peer-to-peer advising in 2014-2015. Additionally, he served as the Vice President of the Graduate English Association in 2014-2015 and has taught writing seminars for the Critical Writing Program, the College of Liberal and Professional Studies (LPS), and the Pre-Freshman Program (PFP). Finally, he helped work on the redesign of English Department's website in Spring 2015 and won a Penfield Fellowship to conduct research in Japan on nuclear disaster and its representations in Fall 2015. 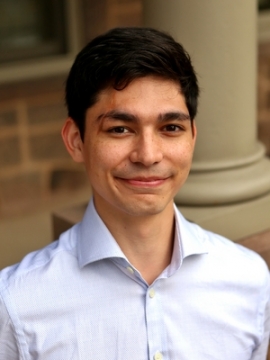