This project is one element of a comprehensive re-assessment of a monument known as the “Basilica of Junius Bassus,” a splendidly decorated hall from 4th century CE Rome. The visualization is aimed at conceptualizing the experience of the fourth century viewer and tracing renovations to the basilica over time.

As evidence to help build this digital visualization, I have collected drawings and visitors’ accounts of the basilica, including a late 15th century elevation drawing by Giuliano da Sangallo and pages from the notebooks of Cassiano dal Pozzo, which show wall decoration that is now lost. We also employ the archaeological data from the building's summary excavation in 1929. These testimonies to the now-destroyed building allows us to rebuild the hall's architectural skeleton and to make conjectures about its interior decoration of wall revetment in opus sectile.

Any reconstruction, however evidence-based, is necessarily subjective. We intend to make that subjectivity legible to the viewer, both by making accessible the raw data on which design choices are based and by offering multiple hypothetical permutations of the model so that no one model pretends to perfect historical accuracy.This record-keeping and transparency are crucial to allow scholars to assess the model critically as a piece of scholarship (however creative) on 4th century Roman architecture and architectural decoration.

Our project also addresses further research questions instigated by the collaborative reconstruction process and examines the degree to which the model and the data on which it is based are shaped by the views of the Renaissance visitor, the Fascist era archaeologist, and the 21st century draftsperson. 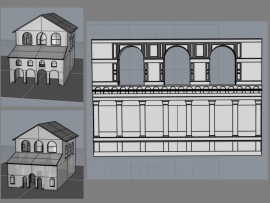