Mélanie Péron is a Senior Lecturer in Foreign Language in the department of Romance Languages. She teaches both French History and Culture courses. In Fall 2016, she created the course « Paris during the German Occupation and its Places of Non-Memory » for which she received the Rutman Fellowship from the USC Shoah Foundation. The course explores the spatial occupation of the French capital as well as the occupation of the French memory and literature. Students were asked to write on a blog the memoirs of a fictional character living in the Paris of the time.  The writing project enabled them to imagine the unimaginable, to express the ineffable and, in turn, to participate in giving shape to the voids and silences left in the national memory.

Mélanie is currently working on creating a multimedia, multi-layered map of Occupied Paris. The map will pinpoint and present the key places of the Collaboration and the Resistance. It will include photographs, written and audiovisual testimonies as well as propaganda clips.  Along with making history more visible, this digital mapping project aims at mending the holes left by the vanished. 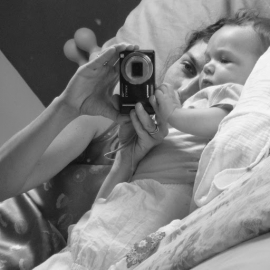