Julie Beth Napolin is a scholar, musician, and radio producer (KALW’s “Philosophy Talk”). She is former Associate Director of The Digital Yoknapatawpha Project, a trustee of the Joseph Conrad Society of America, and an officer-at-large of the William Faulkner Society.Her work participates in the fields of auditory cultural studies, transatlantic modernism, 20th-century American literature and culture, critical theory, and narrative.  She is particularly interested in the history of sound reproduction and its intersections with narrative, and what practices of listening can tell us about the novel as form.Her book manuscript, titled The Fact of Resonance, is a study of the sound effects of modernist narrative organized around auditory phenomena (“audibility,” “echo,” “sinister resonance,” and “reverberation”). The racially and sexually fraught narrative spaces of Conrad and Faulkner instantiate what the book calls “narrative acoustics.” Working with aural phenomenology as both theme and method, the book theorizes sounds and listening in the work of Conrad and Faulkner in relation to James, Du Bois, Benjamin, Fanon, Fitzgerald, Ellison, and Chantal Akerman. If modernism destabilizes what can be known, then how do modernism’s unstable epistemologies “sound?” The power of modernist narrative acoustics is to create indeterminate spaces where “facts”–of event, location, and identity–disperse and multiply. The book rethinks the central categories of narrative theory through sound phenomenology.Recent essays include “Elliptical Sound: Audibility and the Space of Reading” in Sounding Modernism, eds. Julian Murphet, Penelope Hone, and Helen Groth (University of Edinburgh Press, 2017). 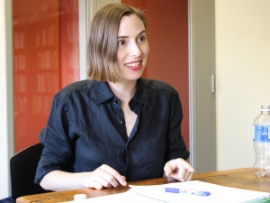