Molly Des Jardin is the Japanese Studies Librarian and liaison for Korean Studies at Penn Libraries, where she has served in this role since 2013. Before coming to Penn, she earned a PhD (2012, Asian Languages & Cultures) and MSI (2011, Library & Information Science) at the University of Michigan and was a Reischauer Postdoctoral Fellow at Harvard University from 2012-2013. As a postdoctoral fellow, she was the Archive Development Manager  for the Digital Archive of Japan's 2011 Disasters; while at Michigan she also interned at University of Nebraska-Lincoln's Center for Digital Research in the Humanities. Molly's interest in digital humanities stems from her undergraduate experience studying computer science and history, and she has worked on projects focusing on metadata and natural language processing, from Japanese studies to Victorian women's travel narratives.

Molly's current project involves analyzing the early 20th-century Japanese magazine Taiyō, which ran from 1895-1925. The magazine spans years including the Russo-Japanese War and Japan's annexation of both Taiwan and Korea, and thus she is interested in analyzing language use to investigate how Japanese were talking about boundaries and identity within the changing shape of their nation at this time. Please visit Molly’s website to learn more about her other professional work. 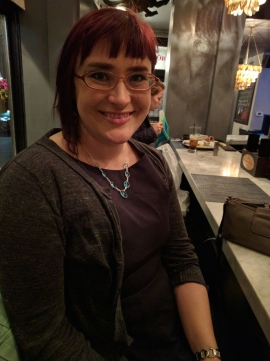