Clovis Bergère is Assistant Director for Research at the Center for Advanced Research in Global Communication (CARGC) at the Annenberg School for Communication at the University of Pennsylvania. He is a visual ethnographer whose research examines the politics of youth as they are realized in relation to digital media in Guinea, West Africa. He completed his Ph.D. in Childhood Studies at Rutgers University-Camden in 2017, with a specialization in global youth media. His work has appeared in the International Journal of Communication, African Studies Review, American Anthropologist as well as several edited volumes. In addition to digital media, he has written on street corners as spaces of youth socialization in Guinea. Prior to moving to the United States in 2011, he worked for seven years as a project manager in Children’s Services in London, UK, where he built over thirty innovative playgrounds and youth centers, focused on natural play and collaborative design. 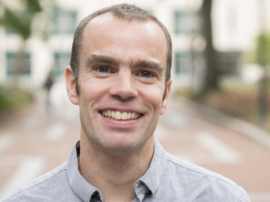